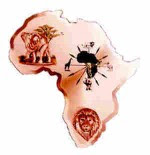 I'm remembering why -- for the impatient or the uninitiated -- "Africa time" can be so frustrating! The way that appointments slip and slide, people commit and uncommit..for a reporter it can be daunting trying to figure out what is really going to happen when (or if it will happen at all!)

In my case, today, it didn't. Spent several hours waiting at Bara Hospital for two of the Phambili trial participants who said they would take me visit an AIDS hospice in Soweto. I had hoped that this would give a good view of how the disease is hitting the community, as well as a window into the motivation of the (by and large very young) South Africans who opted to take part in HIV vaccine research trials.

But the wait was fruitless -- despite several phone calls and updates, they never came. I guess I'm not surprised: it is asking a lot of someone to guide around a nosy foreign reporter. And it is Friday afternoon! Still it's too bad. The hard part about this project will be breaking out of the confines of clinics and offices to see how people really live. I'm not there yet.

On the upside, I had a great, 1-1/2 hour interview with Glenda Gray, the principal investigator on the Phambili trial. "Prof. Glenda", as she is almost universally known by the Phambili crew, is certainly an effective advocate for the AIDS vaccine enterprise, and despite the disappointing results so far she seems ready to carry on. One interesting element that was underlined during the interview was the tension between researchers and government health officials. Most top-ranking HIV clincians and researchers in South Africa are white, so inevitably the argument over who decides where to go with clinical trials (done mostly on black citizens) takes on a racial tinge.

But that's the way it is with almost everything in the "Rainbow Nation" -- a country publicly and sometimes angrily wrestling with the race questions that bedevil so much of the world.
Posted by A Quinn at 10:16 AM