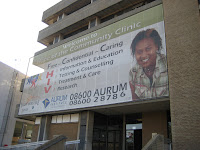 I was scratching my head too, but Klerksdorp is where I found myself on Wednesday as I began two days of interviews at the Aurum Institute's AIDS vaccine trial site.

While the STEP AIDS vaccine trial and its South African counterpart Phambili were both stopped last year, work is still going in places like Klerksdorp to try to make sense of what happened and where the vaccine enterprise is going from here.

One of the old South African towns built on the gold that made the country rich, Klerksdorp is still surrounded by mine complexes run by major miners such as AngoGold Ashanti, which established Aurum in 1998. The institute is now a public non-profit, however, and is one of the major HIV research groups in South Africa.

It was an interesting couple of days -- I met my first few AIDS vaccine trial volunteers, and sat in on a meeting of the trial's Community Advisory Board which included in its number both a Christian minister and a traditional healer or sangoma ( "He's a witchdoctor!" one of the other board members whispered to me with a smile.)

People were very open about their hopes and disappointment over Phambili, and where they see the vaccine project going. Most said they believe work has to continue. "Many people are dying. My people are dying" one of the trial volunteers said to me.

For the rest of it, Klerksdorp looks alot like Riverside County, California -- a small old downtown surrounded by a vast wasteland of car dealerships and strip malls, eventually flattening into bushveld and mine dumps. The city's small museum is mostly under renovation but did feature a weird exhibit of different cells once used to house blacks and whites, complete with black and white plaster figures.

I'm still going over what I got from Klerksdorp and experimenting with my new digital recorder. Its great to download interview files to the laptop, but listening to them has really made me aware of how cold and clinical my interview style is -- I'm no Oprah, but I guess that's no surprise. I have to work on it though.

I've had patchy Internet connectivity this week but I hope it smoothes out now. I'm still just fooling with this blog but let me know what you think.
Posted by A Quinn at 12:34 PM