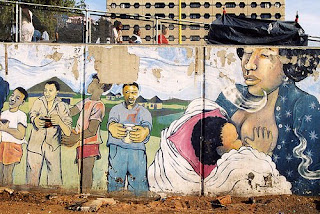 I finished the first stage of the project today, wrapping up a couple of last interviews with AIDS vaccine trial participants at Baragwanath Hospital.

Noluvuyo Mncini was my final interview. A 20-year-old from the vast Orange Farm shantytown outside of Johannesburg, Noluvuyo was not letting the world get her down: she showed up in high heels, a smartly cut jacket and long beautiful braids.

Like so many of the participants I talked to at Bara, she seemed both very young and very determined. She lives with eight siblings and her parents in a small house in Orange Farm. Her father was recently laid off, and the whole family is making do with his minimal unemployment insurance -- and, presumably, the periodic payments Noluvyo gets for coming in to the Phambili clinic.

Places like Orange Farm are where South Africa's AIDS epidemic is hitting hardest. People are afraid to get tested, medical services are minimal, and the heavy stigma that surrounds HIV can make people reluctant to access free antiretroviral drug treatment.

Noluvuyo said she sees it all around her: last Saturday she spent at the funeral of a friend, dead at the age of 23.

Of course, the money she gets for participating may be important too. Each participant is paid 150 rand (about $20) to come in for their clinic check-ups. The money is reimbursement for transport, but in extremely impoverished households like Noluvoyo's it can make a difference, if only for a couple of days.

She said she thought most of the Phambili participants were in it for the money. Few others that I talked to agreed with her. But teasing out the motivations of people who are part of the AIDS vaccine enterprise is tricky: most sincerely seem to want to be part of the solution, however far off. But most are also very young and very poor -- an ethical conundrum for researchers.

The picture above is not mine, but shows one of the murals painted on the walls of the hospital complex. I've come away with lots of notes and lots of questions. I'm planning to be come back in August to do some follow-up, and also (I hope) to set up a TV version of the story with colleagues at Reuters Television.
Posted by A Quinn at 11:11 AM