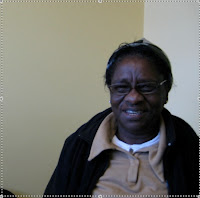 Yesterday I had a long talk with Gloria Malindi, a 60-something Soweto grandmother and retired nurse who also serves as chairperson for the Community Advisory Board at the hospital's vaccine trial site.

Gloria has the cuddly look of a South African "go-go" (granny), but she's no slouch when it comes to self expression or the right to protect herself from misinterpretation.

"Journalist, don't distort me!" she warned, before giving me her two cellphone numbers.

The Community Advisory Board (CAB) is an important part of a vaccine clinical trial, serving as the main conduit between the scientific researchers and the community upon whom the research is being conducted. The Soweto CAB includes nurses, teachers, religious leaders and a hefty helping of HIV/AIDS NGO workers, who are then tasked with "going back to the community" with information about the trial.

Gloria's more at home than I am in discussing the specifics of the Phambili vaccine, and obviously has logged plenty of time in the dismal world of international health meetings, where words like "paradigm shift" and "relevant stakeholder" are tossed around like confetti.

As a person this is gratifying -- even if, as a reporter, I'd like a little more controversy! Perhaps that will come as I get deeper into the story -- but perhaps not.

A WORD ABOUT SECURITY

It has been funny getting reacquainted with South Africa's security obsession. Everything is triple locked, gates slam shut, guards issue passes...moving through parts of this country can be like moving through a medium security prison. Today when I went for an interview in downtown Johannesburg, I had to have my car registered at the garage, then sign OUT of the garage as a pedestrian, walk down a short street under the view of security cameras, then sign IN to the building where I was going, get a security pass, and go through turnstiles. It's all done with good humor though and I guess in a country with crime rates as high as South Africa's it is to be expected, but it can make even the bravest person a little phobic!
Posted by A Quinn at 10:57 AM