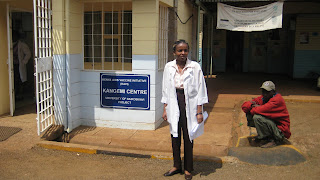 There’s a freezer full of dashed hopes at the AIDS vaccine clinic in Kangemi, one of Nairobi’s crowded slums.

The freezer, kept under multiple lock and key, contains vials of the vaccine prototype that many researchers hoped would mark the next big step forward toward preventing new HIV infections.

But like other trial sites across the globe, Kangemi is now under orders to destroy the vaccine following a decision by U.S. sponsors not to proceed.

“It will be autoclaved and incinerated,” said pharmacist Jennifer Kigera. “We are still hoping for a new product one day.”

They will have to wait a while.

The cancellation of PAVE followed the mid-way halt of a similar trial using a vaccine developed by Merck (see my entries on Phambili), a double blow.

Kangemi, which like many other sites had been set up expressly to prepare for big Phase II and Phase III trials, now has to repurpose itself – looking at basic epidemiological studies on HIV incidence in the region as well as tracking the early progress of infection among volunteers who recently rested HIV positive.

Gaudensi Mutua, pictured above, is the research physican at the site – which is made out of converted shipping containers stacked outside Kangemi’s municipal clinic.

“We all felt crushed and a little bewildered,” Mutua said of the PAVE decision. “It was the hype. Everyone had such high expectations.”

Kangemi hopes its work on HIV infection will feed into studies of two select groups of people – the “Long Term Non-Progessors” and the “Elite Controllers”. The first represent people who have been infected with HIV but take a very long time to develop any symptoms of AIDS. The second, a much smaller group, never develop symptoms at all.

By studying how their immune systems work – and particularly the role of “cell mediated immunity” which keeps long-term infections under control (think chickenpox), scientists hope that they will come across a key to disabling or even eliminating the HIV virus.

“It is these two groups that keep alive the hope that a vaccine is possible,” said Prof. Olu Anzala, the head of the Kenya AIDS Vaccine Initiative.
Posted by A Quinn at 4:18 AM