Cute is not a word 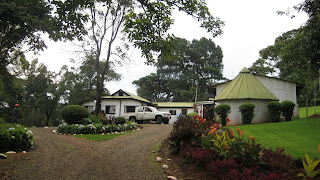 that springs to my mind when I imagine a U.S. military installation -- but here I am in one of the cuter ones. This is the guest house at the U.S. Military HIV Research Program in Kericho. It is set amid lush tea plantations in Kenya's cool, wet highlands that mark the southern edge of the Rift Valley. It takes about an hour and half to get here from Kisumu, juddering at 120 km/hr across some hilariously pot-holed roads navigated by frighteningly self-confident drivers.

The cute ends here, though, and real work gets done not too far away. The USMHRP office in downtown Kericho sits atop a stubby block of converted flats, backing up onto an intensely busy gas station which seems to be a major transit crossroads for minibuses and everybody else.

Despite its military affiliation, there's no camouflage fatigue around. The USMHRP site in Kericho appears entirely civilian run, and in fact there is only one American -- the director Dr. Doug Shaffer -- working here, while the rest of the staff, from senior scientists to data entry monitors, is Kenyan. Administratively, it's a joint effort of the U.S. military and Kenya's KEMRI medical research institute.

The USMHRP has been involved in HIV vaccine work here for several years, and was due to have been a site for the next round of large scale tests before they were scrapped last week out of lingering safety concerns. They are still "cohort building" looking for the next possible trial, while research into other areas of HIV goes on.

One fascinating study they've got underway involves looking at the actual cost benefit of putting tea plantation workers on ARV treatment. While its not news that people get better after starting on the drugs, the genius of this study is that there is a very basic -- and very measurable -- way to measure the economic difference made by the treatment: how much tea the workers are able to pick. Apparently its the first study of its kind to attempt to put a $ figure on productivity gains associated with the widening ARV roll out.

The PEPFAR program for AIDS drugs seems to be playing a big role here -- in essence, the availability of free public treatment is opening ethical doors to study proposals which would have been impossible before when treatment itself, offered through a clinical trial, might have been seen as an inducement.
Posted by A Quinn at 11:41 AM