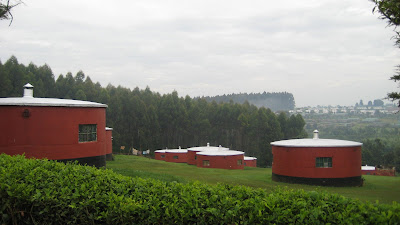 Ok, it looks like a Teletubby encampment but this weird little village of round red cement houses is actually corporate housing for James Finley Teas, one of Kenya’s biggest tea exporters.

In many ways it appears idyllic – groups of these houses are set in rolling tea fields which, from a distance, look like the frozen emerald froth of some great sea. The workers (“pluckers”, locally) are actually in pretty good shape by working class African standards. They are given free health care, their kids go to company schools, and the little round houses come with the job.

Still, tea plucking is backbreaking work and at 7 shillings a kilo, a good day’s take home would be only about $5. That’s better than the $1-per-day benchmark that the U.N. has set for the poorest of the world’s poor, but it’s not exactly easy money.

The tea plantations have worked with the U.S. military’s HIV program and many of these workers have been among the volunteers for HIV vaccine studies. From a researcher’s point of view, it’s a great “cohort” – a large group of people with relatively similar living patterns in a controlled environment.

Ironically, the pluckers are almost too good. They are generally seen as at a low risk for HIV, so discovering whether or not a potential vaccine would work is that much harder – is it the vaccine working, or is it simply that these workers are too bushed to get up to much risky behaviour?

For that reason, the Walter Reed program (like the IAVI group in Mtwapa I mentioned before) is gearing up to bring a high risk group under study – commercial sex workers who make their living in the trucker bars and hostels along the main highway. This group will be harder to find, harder to enlist, and harder to track – but may, in any future vaccine study, be the ones with the answers.

I’m leaving Kericho and the Walter Reed program today. On Monday, I’m hoping to do another IAVI site in one of Nairobi’s many slums.
Posted by A Quinn at 11:07 AM