Ok I admit it 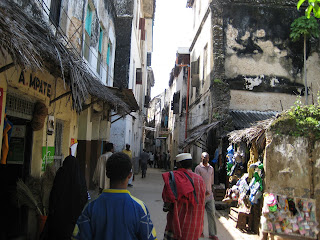 I’m not exactly “roughing it”. But wait (I swear) there’s a reason!

I’m now in Shella, a village on Kenya’s Lamu Island. It is hardly undiscovered – the construction/reconstruction around here is amazing. That is all thanks to Lamu’s reputation as a get-away-from-it-all destination for various jet set stragglers (bonjour, Princess Caroline).

This is, of course, Kenyan winter and therefore off season, so no ramshackle Royalty to be seen. But the weather is great and Lamu is a spectacular place, enough to have been named as one of the U.N. World Heritage Sites – if you give that any credence given the politics involved there.

Lamu’s claim to fame is that it is the best-preserved Swahili town left standing, better and more authentic (so the experts tell us) than Zanzibar’s Stone Town. It’s a medieval agglomeration of squat buildings built out of stone and coral, all facing an estuary that gives out to the sea. The waterfront has a few Victorian-era monoliths – the District Commissioner’s Office, the Museum – but behind that the streets quickly shrink into a dark, confusing rabbit warren of alleyways and bypasses. None is wider than 8 feet, so cars are out – the only mode of transport on Lamu is the donkey, which are here in abundance. Local mahouts jockey them around, sweet-eyed beasts that let out the most heart-rending bleats at all hours (I know…they woke me up last night).

The Muslim heritage is strong here – many of the women are veiled, and alcohol is verboten except for a few, touristy places. But on the whole it is extremely relaxed and friendly. Everyone, and I mean everyone, pipes up with a friendly “Jambo!” (hello!) on the walkways, which can be exhausting.

My excuse for being here is twofold. The KEMRI malaria people in Kilifi could only see me last week, and the U.S. Military HIV programme in Kericho was only free next week.

Voila, a few days to spare.

It also dovetails with an ongoing interest of mine, which is the triangular relationship between the Sultans of Zanzibar (the source of Swahili culture), Kaiser Wilhelm’s Germany and late Victorian England in the latter 1800s. It’s colonialism with a capital “K” – the Zanzibari rulers were Arabs from Oman and the African population suffered from all hands. Still, it’s a fascinating glimpse of one of the early encounters between Africa, the “Muslim World” and modern Europe.

More about that, if I ever get my act together, later.

Meanwhile, back on Lamu, everything is pretty good. Shella has one world-class hotel – the Peponi, frequented by the above mentioned royals, clapped out rock stars and site of the only decent Internet connection, from which I will post this– but also a lot of very nicely set-up B&Bs. I’m staying in one (thanks Andy Meldrum!) called Banana House, run by a Dutch woman named Monika and her Lamu husband, who goes by the name of Banana.

Monika is a yoga master, and I hear her doing athletic yoga breathing just as the sun rises. She’s also a specialist in the “Art of Living” (apparently a recognized qualification?) so we’ve got a Wellness Center attached to the hotel. I slept through the yoga class this afternoon – too much sun and heavy thinking – but will be bending my heart out tomorrow, I promise.

There’s a lot of construction around, so days are not quiet. But it is a beautiful place – and, for the moment, empty so I am the sultan of my surrounds, sitting on an open terrace with the fullish moon now mottling through the flowering vines overhead (I can’t spell bougainvilla but that’s what it is). In the garden, where the guys are digging by hand what promises to be a pretty cool swimming pool, there are frangipani, which give off the sweetest honey scent as the sun goes down.

So that’s where I am right now. But I’m still focused on global health, don’t get me wrong. More about that soon.
Posted by A Quinn at 11:52 AM