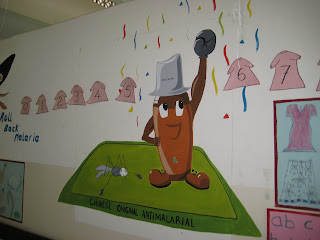 I’ve spent the last few days at the KEMRI-Wellcome center at Kilifi District Hospital (picture from kid's ward above...am still negotiating to actually take pictures of the kids!). It is a joint project of Kenya’s Medical Research Institute – the country’s equivalent of the U.S. Centres for Disease Control – and Britain’s Wellcome Trust.

The “Unit”, as it is known, is a major research center on Kenya’s coast and the home base for a number of clinical trials including the coming Phase III large scale trial of the RTS,S malaria vaccine candidate.

Dorcas Kamuya is the community liason manager, who is in essence charged with sorting out the unit’s relationship with the local people who must consent to being part of a medical research project. In the case of most malaria research, this involves parents giving consent for their children – the infants who are the most likely to contract and possibly die from severe malaria.

Dorcas has a broad smile and a businesslike manner, and readily discusses the complications in the relationship between researchers – who are equipped with state of the art equipment and aspire to produce world class data -- and the researched, often subsistence farmers in one of the poorest and most unequal regions of Kenya.

Unit scientists have run into a series of problems, including widespread rumours that their requests for blood samples were somehow related to “Miyani”, a local version of the vampire legend. And the unit had to replace the familiar snake-and-staff logo of the medical fraternity on its vehicles after the serpents drew suspicions that somehow they were involved in devil worship.

But a more persistent problem for medical researchers is what they call the “therapeutic misconception” – the idea that parents get that somehow participating in the research will result in a better treatment for their own children, and that declining to participate may mean the children aren’t treated.

In any randomized clinical trial, there is at best only a 50/50 chance that a given child will receive the test treatment. And even then, there is no guarantee that it will produce any protective or curative effect – all the trial is aimed at doing is delivering data on whether or not the treatment might be effective in a broad sense.

In kiSwahili, there is no direct equivalent for the English term “research”, at least in a medical context. Various words including “utafiti” (study), “unchunguzi” (investigation) and “mradi” (project) may be used, but Dorcas said that none really conveys the idea of scientific research with its hard repetitive queries and often elusive conclusions. How do people really give “informed consent” for a process that is at least initially alien to them?

It is just one example of the weird collision of science and hope that occurs around here every day.

The KEMRI group says they are pretty sure that they are overcoming the culture gap – and point to rising numbers of people declining to enroll in trials as evidence that “they are learning that it is ok to say no”…..an ironic symbol of success, but one just the same.
Posted by A Quinn at 1:44 PM