You Gotta Have Faith 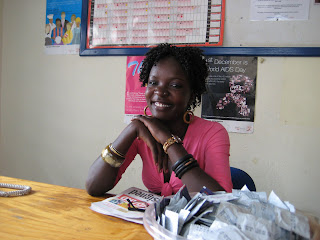 On her desk is a huge bowl, overflowing with condoms. In her pencil jar is a large wooden penis.

Thanks to Faith and other volunteers like her, the IAVI center in Mtwapa is reaching out to some of the most marginalized – and most at risk – populations in Africa: female sex workers (FSWs in global health speak), and men who have sex with men (MSMs).

“I’m MSM friendly – it means I have a lot of friends,” Faith said with a low laugh.

Acceptance and understanding are hard for both of these groups in Kenya, where prostitution and homosexuality are illegal on the books and widely stigmatized by political and religious leaders.

And both groups are seen particularly at risk for the next wave of HIV, in large part because existing public education programs and interventions ignore their existence.

Not so at the IAVI center.

Mtwapa, despite its rock’n roll reputation, is a pretty gritty little town. About 60 km north of Mombasa, it has an aura of fun because its bars are open 24 hours a day, there are beaches and hence tourists, and the taxi system works thru the night. But the reality of Mtwapa is a collection of ramshackle dives, blaring music, set up next to day traders peddling everything from car parts to DVDs and salted with a lot of dubious hotels promising “excellent service” and “superior meals”….

The IAVI center lies down one of Mtwapa’s rutted, muddy roads. Go through its gates and you enter the world of international AIDS enterprise – clean, new furniture, decent computers, and in the labs up to date equipment. The IAVI center was one of many in Africa that was gearing up to test the next wave of AIDS vaccine candidates – until hopes came crashing down with the disappointing results last year of South Africa’s Phambili trial, which cast doubt over the current basic premises of AIDS vaccine design.

The work goes on, however.

In Mtwapa, they are doing what is called “cohort building” – trying to attract and retain people seen at particularly high risk for contracting HIV, such as MSMs and FSWs. While the point initially was to enroll participants in vaccine trials, the outreach now is about education. And research: the more we understand about how HIV is transmitted, by whom and to whom, and under what circumstances, gives us more weapons to halt its spread.

“Sometimes they come in and I call a counselor, and by the time I get back they are gone,” she said. “We are trying to get them to stay.”

You Gotta Have Faith
Posted by A Quinn at 1:31 PM