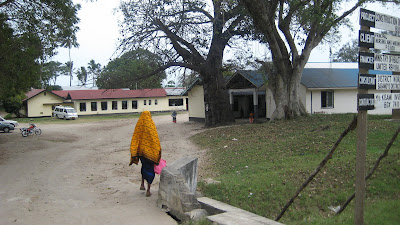 I’ve wrapped up my visit to Bagamoyo (pictured above, the district hospital and its signature baobab trees!).

My final interview was with the “malaria focus person” on the hospital medical staff. She apologized because she was new on the job for only two weeks. Her predecessor in the post had recently died – of cerebral malaria.

That a malaria doctor can die of malaria in Tanzania, now, is shocking. There were extenuating circumstances – he had been diagnosed with hypertension, and the initial diagnosis was stroke, which meant that malaria “slipped through” undetected until it was too late. But even so it surprised me.

Doctors and nurses here work on the slimmest of margins. The hospital, serving an area of some 200,000 people, has only one full MD on staff, plus several assistants and “clinical officers” who perforce do much of the work. Referrals go to Dar es Salaam which is about 75 km away and overstretched as it is.

I’m not sure I learned a lot about malaria vaccines here, but I did learn more about how hard it is to be a health worker in what they call “resource poor” settings. It’s hard, and often depressing work. In Bagamoyo, the presence of the Ifakara institute – with its well connected funders pushing along projects including the malaria vaccine trials – has been a bonus. But it is still at least partially representative of the difficulties in getting health care to the people who need it in developing countries. When even the doctors are dying, of preventable diseases, something is going wrong somewhere.

Anyway I’m off to go snorkeling (yes you heard me right). And back to Joburg midweek where I am going to try AGAIN to get somebody from the health ministry to talk to me. And then I’ve got an “athletics day” date with some AIDS vaccine volunteers, and then I’m headed home. Hard to believe.
Posted by A Quinn at 12:19 PM