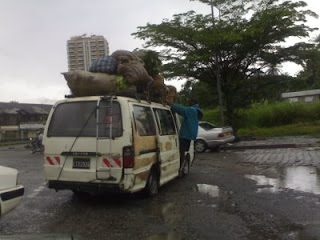 Gugulethu may lie within shouting distance of Cape Town's famous Table Mountain, but it is a different world. While in Cape Town, all the world is a stage for the convertible-driving, sunglasses-wearing hipsters that seem to rule the roost, in Gugulethu the theater is invisible -- and in taxis.

Cape Town must be one of the most beautiful urban settings in the world, the endless wash of the rough South Atlantic pounding in on shiny white apartment blocks ringed by beautiful roads that stretch up into the mountains. But behind the mountain, Gugulethu and its township neighbors are one of the most dismal -- stretches of homemade shacks, cobbled together out of plywood shards and bits and pieces of corrugated iron, and all cheek-by-jowl with busy freeways and featureless industrial parks. It's right by the airport so you can't miss it -- which should be an interesting welcome for the World Cup 2010 tourists when they arrive in the "new South Africa".

I spent the last couple of days at the Emavudleni AIDS vaccine clinic in Gugulethu (in Crossroads, to be exact). It is the vaccine trial site run by the Desmond Tutu HIV Foundation. Like Baragwanath in Johannesburg, this was one of the main sites developed to run new trials of HIV vaccines -- an enterprise that has all but stopped with the failure of the most hopeful candidate last year (see earlier entries on Phambili/Merck).

It's a familiar sight now after two months on this project -- a fully equipped, fully staffed operation searching for a new mission. The scientists and counselors and Emavudleni are working on side studies, but the raison d'etre for the clinic has been ripped away. There simply are no major HIV vaccine products in the pipeline.

It's a depressing reality -- for them and for me. But the work continues -- at at Emavudleni part of that involves invisible theater.

Community educator Pozna Gomomo talked me thru how this works.

Three AIDS vaccine workers will get on a minibus taxi -- the often ramshackle minibus that serves as the main mode of transportation in the townships. One vaccine worker will sit right in the front, another right in the back, and a third, surreptitiously, will take a seat in the middle.

The one in the front will call back to the one in the back: "Hey, didn't I see you at the AIDS vaccine clinic?"....the reply will come "Yes, they've told me how it works and I think I'll sign up."

The "sleeper" vaccine worker, seated in the middle of the bus, will then pipe up:

"Don't they infect you with HIV at those places? Why are you going there?.." and thus a discussion will start.

"You know that those 18 people in that taxi will be going home and talking about what they heard," Gomomo said. "It is a way for us to start discussion, and to get the message across."

A quick google of "Invisible Theater" shows that it was developed in Latin America as an activist/theatrical way of making political points. It's also known as "Theater of the Oppressed"...which seems apt.

Gomomo says Invisible Theater and other forms of community outreach are part of showing that they are still "engaged" with the community, and keeping the AIDS vaccine issue in people's minds despite the lack of immediate hopes. I wonder how long people will keep listening.

I'm back in Joburg now and have to admit I'm dragging a bit. I feel like I keep asking the same questions and keep getting the same answers. I have to be more creative.
Posted by A Quinn at 6:50 AM