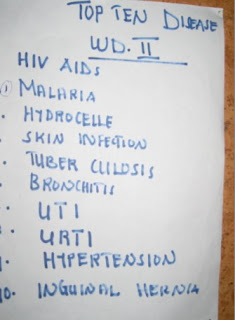 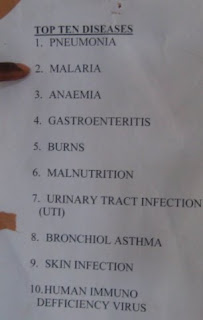 I’ve gotten used to seeing notices like those posted above in the African hospitals I’ve visited – an easy aide memoire for clinicians on the most usual diseases they’re likely to encounter.

The picture on the left is the Top 10 Disease List for the pediatric ward at the Bagamoyo District Hospital, while the one on the right is the Top 10 for the adult male ward.

Couple of interesting things: for pediatrics, the rank of malnutrition here is much lower than I’ve seen elsewhere, which is strange because it is a poorer region, on the whole, than the others. Doctors say food isn’t a problem in the region – and I guess this proves it. But I can’t really see why this would be so different from Kilifi in Kenya, which is only a couple of hundred kilometers up the coast. I’ll keep asking.

The other odd thing is the relatively low ranking of HIV. There’s an estimated adult HIV prevalence of about 8 percent in the region, meaning HIV should probably be higher on the pediatric list. But doctors say that this reflects more the population sample than anything else: these are babies born, for the most part, in town – where mothers have access to regular antenatal care. In rural areas most mothers give birth at home under the care of traditional birth attendants – and HIV tests as well as drugs to prevent mother-to-child transmission are not as widely available.

HIV jumps to the top of the list for the adult males. Malaria as number two is a sign, doctors say, of overall decline in malaria prevalence – people are getting exposed later, and often no longer have the childhood immunity that most people used to develop as a matter of course. It’s a good thing in a way, although not for the guys admitted to this bare bones facility.
Posted by A Quinn at 10:43 AM