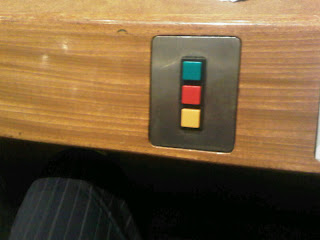 We arrived in New York last night from Ottawa -- howling storm at La Guardia -- and convoyed into Manhattan with a few of Clinton's people. In New York, she goes home to Chappaqua and everybody else stays at the Waldorf.

Not much to say about the hotel -- fancy lobby, outdated rooms, and don't even think about ordering any food or drink, all of it is insanely expensive. It goes to show how long places/companies can trade on a well-known brand.

The point of the New York trip was a U.N. donors conference for Haitian earthquake relief. It is the kind of set-piece story that is pretty much written even before it starts. They all gather, talk a lot, pony up the money, and its over. They topped $5 billion this time, although (of course) it isn't really clear how much of this is new money, or just recounting old contributions, or debt relief, or whatever. The point was they wanted to make a statement and they did.

We had the final press conference in one of the conference rooms at UN headquarters. It is undergoing renovation, but the place really is always going to be a relic of the 60's...made for and equipped with technology that is so outdated it looks like something from a movie. That's my pin-striped knee underneath the desk, with the voting buttons.....I didn't push them.

I did get to ask the question tho -- in these events, questions are limited so the different groups (U.S. reporters, international reporters etc) have to come up withs someone to as the one question they are going to get. I did one on Haiti, just to be polite, and then asked about progress on Iran sanctions. UN Secretary General Ban Ki-moon was not pleased -- but what can he expect? Clinton answered it (sort of) and the day was over.

I'm going out to dinner tonight with my old friend James and then back to DC tomorrow on the train.
Posted by A Quinn at 7:46 PM