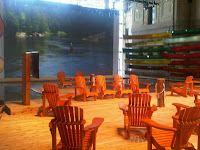 First trip to Toronto, which reminds me of somewhere else except I can't think where that is.

Am up here for the G20 summit -- not with Hillary this time, but to handle "political" news out of what is supposed to be primarily an economic summit. We're staying at the Hilton downtown, which is nice -- except the security clampdown has made the place into a ghost town. We shuttle to the "Direct Energy Center", the cavernous convention hall where the media center is, in vans driven by nice guys from Minnesota who work for some division of Thomsonreuters I've never heard of.

We were given a security briefing at the start of the thing, which included advice not to sit in front of windows at restaurants because rocks might get hurled at you. But despite a bit of protest action ("protesters emerging from sewers"!) there doesn't seem to have been too much to be afraid of. I wrote a quick piece on this, talking about the decline of mass protest at these kind of summits. It will probably turn out to be wrong but here it is.

Otherwise it has been a lot of waiting in the Reuters room at the press center, tying stuff together from other reporters. The G8 ended up saying some stuff about North Korea but none of it was terribly exciting.

The Canadians have done a pretty good job I think. The picture is the infamous "Fake Lake" that they installed in the press center at huge cost. It is supposed to transport you to "Cottage Country" north of Toronto, but people just go stare at it and then walk away...

They are feeding us pretty well. It must be a huge operation to feed this many journalists, but they've managed lunch and dinner every day. Impressive!
Posted by A Quinn at 4:33 PM 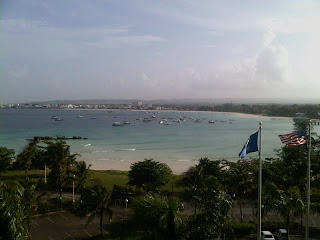 The last day of the trip. It's been pretty good. A little bit of news with the Iran sanctions, a lot of travel. Woke up this morning and had a swim -- lovely live warm water, gentle waves, white sand. Perfect Caribbean beach. Too bad the Hilton where we are staying is such a huge concrete monster.


Followed Clinton to the George Washington House, where Washington stayed in 1751 on his only overseas trip. Its a small place, and lots of people were jammed in, but she said the right things. 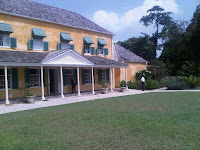 This afternoon she meets Caribbean leaders to talk about security cooperation, a growing issue as Mexico's anti-drug crackdown pushes smugglers to find alternate routes in the region. Not huge news but a good excuse to be in Barbados, if only for a few hours. 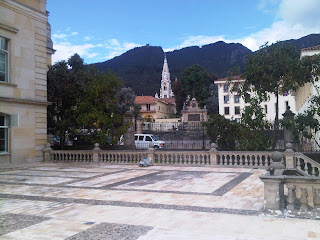 We had a swervy, sick-making ride in the motorcade, up and down hills and roaring around corners -- it's a challenge to write on your laptop when moving so fast in a very crowded van!

Once we got to the presidential office it calmed down tho -- this is the view from one of the terraces
Posted by A Quinn at 4:28 PM 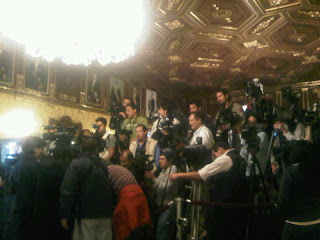 Long day, slowed a little in the aftermath of the pisco sour celebration in Lima the night before! We had a good time though -- this is a small group of journalists, only 6 -- so we are able to organize ourselves a bit better.

We had pisco sours on the veranda of a restaurant on the cliffs overlooking the Pacific -- gray, overcast, but surfers braving the big rollers coming in. Later we went to a place on the beach where they dished up fantastic ceviche. A couple of the gov't guys came with us, and as always it is easier to get a real picture of what is going on when people are relaxed and off the record.

On Tuesday we left for Quito. The trip was interesting because Ecuador's leftist President Rafael Correa has been a part of the Hugo Chavez gang, and critical of the U.S. Clinton's trip was clearly aimed at driving the beginnnings of a wedge between the Latin Lefties, and perhaps she was able to work her magic. They certainly came out looking very friendly, and he at least appeared mollified on the issue of U.S. troops using Colombian bases, which has been a big sticking point.

Quito itself looked great -- spread out on steep mountainsides, lots of windy, climbing alleyways, old architecture. Definitely looks worth a return trip. After a quick stop at the ambassador's house to file our stories, we went back to the airport and on to Bogota. Today's schedule looks pretty light and news-free. Our best hope of getting something might be reaction to the U.N. Security Council vote on Iran sanctions, but that's not really our story down here.
Posted by A Quinn at 10:49 AM 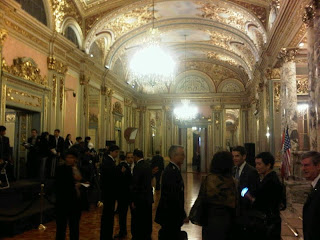 We arrived in Lima last night after a rough flight from DC -- there were tornado warnings around Andrews Airforce Base, and everyone in the "special loading area" was looking nervously at the huge thunderheads outside.

As it was, we got off after only about an hour delay. The alarming bits of the flight came later -- it was pretty choppy all the way, and about five hours in we hit some real turbulence: quick climbs, sudden drops, and a heart-stopping lurch or two to the left and right. People were definitely clutching the arms of their seats, but on the whole I don't think ahir terror hits very hard on Clinton's plane. There's an assumption (maybe ill-advised) that the crew is on top of its game, and the plane must be loaded with special radar etc...right?

Anyway we got in around midnight, and drove straight to the hotel. Lima is huge...I didn't really have any impression of it before, but it is massive. The hotel looks out over a series of cliffs and the Pacific, but the city itself stretches back in a hodgepodge of highways and featureless blocks of flats. This morning Clinton went to the Presidential Palace to meet President Garcia. We were parked in the "Gold Room", seen in the picture above. Its wonderfully ornate, and apparently sits atop ancient Inca ruins.

Clinton and Garcia came out briefly after their meeting, but didn't take any questions, and we were whisked all the way across town to the OAS General Assembly meeting, which is in a brutalist concrete museum.

Clinton is due to speak in a bit -- but we aren't expecting much news. It doesn't sound as though they are going to really grapple with the main issue dividing the United States and Latin America at the moment -- the readmission of Honduras after its coup last year --
Posted by A Quinn at 12:30 PM