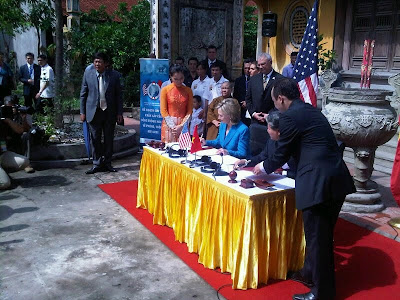 We left Seoul in the morning and flew four hours to Hanoi, where Clinton was attending an ASEAN meeting.

I haven't been here for at least 10 years, and am glad to see that it hasn't been totally changed the way, say, Beijing has. It looks bigger, and more prosperous, but they still have the lovely French Colonial buildings. And it seems like a city with a healthy street life -- people hanging out at makeshift curbside cafes, riding on motorbikes with their babies on their backs, etc.

The meeting itself has been pretty dull. We went to see Clinton sign a new agreement with Vietnam on PEPFAR AIDS funding, at a temple that takes care of HIV-positive children. And since then we've been pretty much locked up in the main convention center (a pretty impressive building with a great, wave-patterned roof) while all the meetings take place behind closed doors.

We went out as a group last night for dinner -- fantastic food. Delicious grapefruit salad (hard to describe), good fish, pork ribs. The picture is of the appetizer plate, fashioned into a kind of bird. It was all about presentation with everything coming in gourds and melon rinds that were elaborately carved. 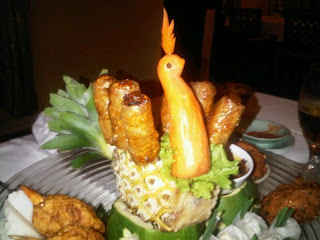 It's a little frustrating to be stuck here and unable to go out and really look around Hanoi again. But it makes me want to come back (maybe go to a cooking school for a while!), so that is something for the future. 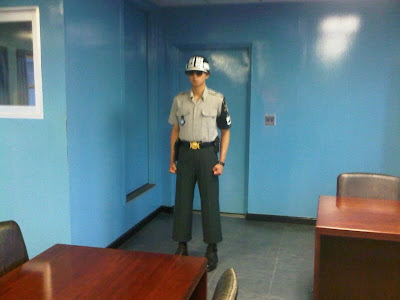 We left Kabul in the evening, moving again by Chinook helicopter from the "secure area" near the U.S. Embassy to the main Kabul airport. It was beautiful.

We got the sense they were a little nervous about the departure. U.N. Secretary General Ban Ki-moon's plane had had to divert the night before because of rocket fire around the airport -- making you think that perhaps it was Taliban practice shots for Clinton.

They shut all the windows and the plane barreled out of there quickly..a fast, steep jump up to get out of range of any missiles. Once we were high enough, you could look down and see Afghanistan in the waning light of day. It looked gorgeous but tough, little towns clustered in greenbelts near rivers, and otherwise just sharp peaks and desert. Must be a hellish place to be a soldier.

We flew to New Delhi and refueled...they let us out on the tarmac so stretch our legs and get a few lungfuls of hot, fume-filled air ... and then on another six hours to Seoul, where we arrived at about 7 a.m.

I had no idea what to expect of Seoul but it looked pretty nice. Lots of cookie-cutter apartment blocks, but also lots of hills and green space. The Han River flows through the middle of it and the hills are also covered with housing, so it had a sort of Mediterranean feel (if that can be imagined in a Korean context, and in a place which has brutal winters).

After a quick shower at the hotel we headed for the DMZ. It's only about 45 minutes north of the city -- you drive along a highway which eventually winds along beside another big river. After a while you are aware of military pillboxes and barbed wire lining the river bank..the other side is now North Korea. Hard to make out much expect there weren't many buildings. But there were gigantic power lines.

The DMZ itself is even weirder. You go through a couple of checkpoints, and then into a sort of wilderness. There is only one South Korean "village" in the zone, and apparently they are pretty lucky -- they don't pay national taxes, don't have to send their sons to mandatory military conscription. And they are some of the richest farmers in South Korea, specializing in "organic" produce with no pesticides (not allowed in the zone).

We drove up to the "Freedom House", which is the big U.N./South Korean centerpiece at Panmunjom. It faces a similar North Korean edifice (no idea what that one is called) and there are a series of small huts in between. The U.S. and South Korean soldiers stand watching across the line, while North Korean soldiers stand with binoculars looking back. We went into one of the huts, which is the room where the two sides hold discussions. You can actually go and "stand" in North Korea by walking across the room. When the South Koreans are in there, they lock the door leading to the North.

The picture shows a guard standing in front of the door. The whole throwback feel of the place is summed up in this guy, with the retro shades (so they don't show "emotion" to the North Koreans, we were told) and the clenched-fist pose, which we were told was called the "ROK-ready stance" (ROK being Republic of Korea).

When Clinton and Gates showed up they were given a quick tour and then went into the same hut. As they went in, a small detachment of North Korean soldiers came jogging out and took up position outside the building, looking into the windows....a great shot for photographers.

We went back to Seoul and later they had a joint press conference where they announced new sanctions against the North, trying to cut off the flow of both dollars and "luxury goods" to the leadership.

Had dinner with a friend and then slept hard.
Posted by A Quinn at 10:37 PM 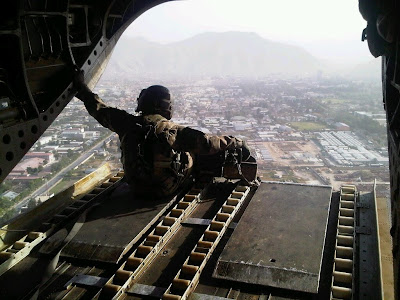 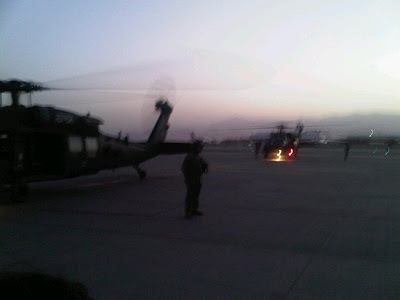 We arrived in Kabul last night from Islamabad -- another jerky, screw-drivey landing that I guess is "defensive flying" against possible rocket attack.

We were unloaded from Clinton's plane and immediately put on military Chinook helicopters for a five minute flight to the Embassy. Loud, and you couldn't see much, but sort of thrilling to look out the open back of the helicopter at the lights (surprisingly bright) of Kabul below.

We were again billeted at the U.S. Embassy. Accomodations were a bit better than in Islamabad. This is another big new American installation, complete with Holiday Inn-style apartment dorms. The cafeteria is pretty bare bones (fried chicken nuggets) but did the job.

Up early this morning to see Clinton meet a selection of Afghan women, who voiced fears that their rights be sacrificed if Karzai reaches some sort of political agreement with the Taliban. You can see why they'd be scared. Clinton assured them they weren't going to be abandoned ... I wonder how much heart they took. 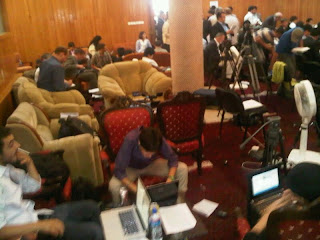 The conference itself was a pretty scipted affair. They had us in a media center (see photo) across the street, where everyone was spread out haphazardly amid couches and fold out chairs. The whole thing was piped in via television, so yet again we were almost there but not really there. The Kabul bureau was doing all the heavy lifting and all I had to do was provide a few briefs on Clinton's speech and her promises to the Afghan women.

Back into a van convoy to the Embassy, where we're waiting for Clinton to get back and then are supposed to get a few minutes with her. Can't see anything of Kabul behind the blast walls..just like Baghdad. Strange to think of how these cities have been transformed by the U.S. military presence. Concrete suppliers must make a fortune. 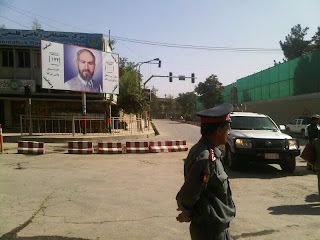 We're due out in a couple of hours and then fly overnight to Seoul. Everybody is kind of punchy at this point but it has been interesting to see the little bits of Kabul that we did see. The Afghans seem a pretty friendly bunch...but I guess we're not exactly dealing with the Taliban here.
Posted by A Quinn at 6:02 AM 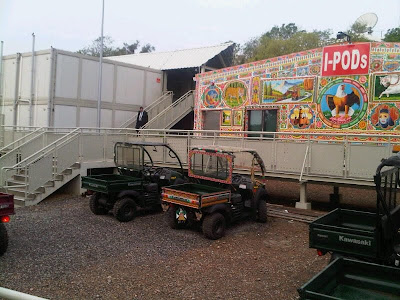 It must have been 120 degrees when we landed on Sunday after the overnight flight from Washington. Its a long haul and it feels like it, because you arrive in the morning and then have a whole day of work ahead of you.

Details of Clinton's trip were kept secret ahead of her arrival because of security fears. Pakistan is what they call a "Critical Threat Environment". It feels threatening. The airport access highway is lined with soldiers carrying guns, all facing out as though scanning the underbrush for attackers. The motorcade is shadowed by a Pakistani military helicopter, and the last vehicle is army truck bristling with more military gunmen. The city is hobbled by checking points, all of which feel on edge.

In the blistering heat and bogged by jet lag, it all feels pretty surreal. Especially when you finally arrive at the typically ugly U.S. embassy and find a sort of half-hearted attempt at a golf club. Its actually not bad, but I couldn't imagine working/living there. They set us up in a "media center" which is actually a rec room next the pool. The pool itself is warm as blood and only the hardiest go in for recreational swimming.

They've also got a 'club house' with an ok restaurant and even a bar upstairs, staffed by Pakistanis. The walls are plastered with warning signs about drinking too much, which must be an occupational hazard for some of the people there.

We had a couple of briefings and then were shown to the Pods...(see picture above). Because the embassy has so many visitors (thanks to the War on Terror/Extremism), it has been overwhelmed by congressional delegations, fact finding missions, and of course visitors like Hillary. They all have to stay at the embassy because the hotels outside the perimeter are seen as too risky. So the solution is the Pod...a reconfigured cargo container that has been refitted as a bare bones hotel double. Its not bad, given the situation. They are airconditioned -- freezing in fact -- and have plumbing with shower, toilet etc. There aren't any windows but I guess that doesn't really matter in Islamabad.

We had a few more briefings and then waited around for Clinton's meeting with the Prime Minister, which yielded a little bit o f news in the announcement that Pakistan and Afghanistan signed a long-awaited border trade deal. The U.S. had been pushing for this in hopes that it would both give Afghanistan more export routes and tie the two countries together as they face off against the Taliban. A small step forward, but the U.S. is ready to trumpet even the smallest at this point.

In the evening the Pakistani ambassador and Richard Holbrooke came by and had a pretty funny joint briefing off the record. Clearly they like each other but perhaps don't fully trust each other, which is a pretty good mirror of the governments they represent.

Today was killer. Up early, into the motorcade, and then a lot of waiting and more transfers. Clinton did a two hour "strategic dialogue" with the Pakistanis, then held a press conference, then went for a "town hall meeting" with about 200 people, then did an hour media round table with journalists...exhausting just to watch, let alone to actually do. Then it was back into the motorcade and we headed to the airport while she diverted to the military GHQ for a one-on-one with General Kayani, who most suspect calls the real shots in Pakistan. 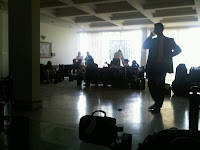 We spent a couple of hours at the airport "VIP" waiting room, unairconditioned. Her meeting went well, or at least long....so there was lots of jet lag nodding off and walking around in the heat. I'm including a picture because it is typical of a lot of the time one spends on this beat. Just waiting in a waiting room.

Once she arrived, we were off to Kabul. I'll write about that tomorrow.
Posted by A Quinn at 12:52 PM