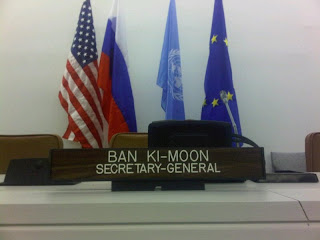 This week we've been at the U.N. General Assembly -- better known as "Ungah". This is THE big event for a certain kind of diplomatic process. Lots of committees, lots of resolutions, and lots and lots of meetings.

Clinton came up on Sunday for a special session on the Pakistan floods -- they've raised about $1 billion so far, but people say it will take $40 billion to pull Pakistan back to where it was before the disaster. Hard to imagine.

Since then she's held a bunch of "bilats" with foreign ministers. The press coverage for these is minimal -- limited to a joint photo at the opening -- but we still try to be there on the off chance Clinton will say something. This involves arriving an hour early for security screening at the Waldorf. And then waiting in a small holding room. When they are about ready the press handlers take us up in a freight elevator and the more waiting in the freight loading bay, next to the half full garbage bin and the tower of dirty towels. Finally they hustle us in behind the photographers, who get about five seconds to take their pictures. Clinton and the visitor might make a little bit of small talk, but that's it..then we get hustled out.

Then it is back into the freight elevator, switch to a regular elevator at a lower floor, and then back down the lobby. The Waldorf lobby is actually a pretty interesting place to hang out during UNGA. Today I saw both Bob Geldof and Newt Gingrich, and there are invariably large collections of Africans wearing fantastic outfits. And always and everywhere security -- stern faced young men and woman in cheap suits and earpieces. You can try to tell which country they are with by their lapel pins. 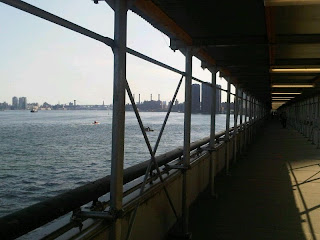 I haven't spent much time at the United Nations headquarters this time around. It is under construction, and the famous dome is covered in what looks like saran wrap. They've moved most of the meetings into a temporary building -- a big cheap box that the locals refer to as Walmart.

But even with the scaffolding and the construction, the view down the East River is pretty spectacular -- complete with little police motorboats mounted with what look like machine guns.
Posted by A Quinn at 4:49 PM