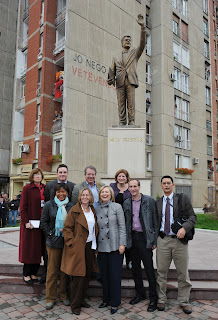 Hillary Clinton stopped on Bill Clinton Boulevard on Wednesday to view one of Kosovo's main attractions: the Bill Clinton Statue.

Clinton, on her first visit to Kosovo as secretary of state, received a rapturous welcome from the crowd waving U.S. flags and cheering on the Clinton Brand, which many Kosovars see as key to their country's independence.

Clinton stopped and looked up at Bill -- now 12 feet high and a shimmering gold -- and expressed her satisfaction with the likeness.

She then plunged into the crowd, or at least as far as security would allow, pressing the flesh campaign-style and expressing her delight at being back in Kosovo as an independent country.

"I'm so glad to be back after 10 years, it's wonderful," Clinton said as reporters and officials scrambled around, the careful choreography of the motorcade thrown topy-turvy by the unscheduled stop.

Clinton appeared about to leave, but then a local store caught her eye: "Hillary", a women's wear boutique about half a block from the statue. The crowd followed Clinton into the small shop where she took a quick look at the wares, smiled and left -- no sale.

Clinton's stop in Kosovo comes at the tail end of a three day trip through the Balkans that has seen her repeatedly urge the region's fractious leaders to put their ethnic animosities behind them and start seriously working to catch up to Europe.

She spent the night in Belgrade -- which was bombed by NATO in 1999 when Bill Clinton was president as the western military alliance sought to stop Serbia's oppressive policies in the renegade province.

Perhaps predictably, there were no welcoming crowds in the Serbian capital, where security appeared to have cleared the streets and kept watchful vigil, one by one, on the long road out to the airport as she left.

We're sitting in the Kosovo parliament building now, waiting for a press conference of Hillary and the PM. After that we are supposed to go to a famous Kosovo Serbian orthodox monastery, and then another "townterview" with local students before heading off to Belgium.
Posted by A Quinn at 7:23 AM