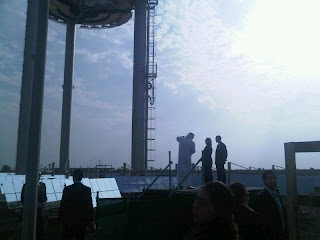 Back with Clinton to the Gulf, less than two months after the Bahrain trip. We left on Saturday night with everyone glued to their blackberries about the shooting of the Arizona congresswoman. Clinton arrived at Andrews AFB in a Gulfstream and walked across the tarmac to get on the State Dept jet.

Big crew this time -- 16 reporters (including TV crew) -- which is more than we are usually used to. This mean bad chances in the ritual seat draw for the few "business class" seats that reporters are allocated. My luck ran out yet again and I got one of the economy seats -- a broken one, at that, with a back stuck in permanent recline mode. Somehow you would think that the Air Force "Special Air Wing" would do a better job of upkeep but no time to complain.

Flew through Shannon, and then on to Abu Dhabi, arriving at 11 p.m. local time. Convoy to the Emirates Palace hotel, which is supposed to the grande luxe hotel of Abu Dhabi. It certainly is mammoth, with lots of Arabian style minarets and a huge "triumphal arch" in front. Inside it was all marble, and the room, when I could find it, was done up in very frilly television-style grandeur. Too tired really to appreciate (or hate) it. Had to file a story on Clinton comments to us on the plane about Israel's latest assessment of Iran's nuclear program (they don't think it is quite as advanced as they said earlier) as well as some stuff criticizing the Israelis for another settlement push.

Sleep..or almost. One thing about grande luxe hotels in this part of the world is that they seem to be obsessive about light/electronic controls, with hugely complicated panels dimming and undimming every light and the television and nightlights etc. None of them work in any "intuitive" way and it took me literally 15 minutes to figure out how to turn out the light. An hour later I had to get up to go to the bathroom and turned them back on...meaning another 15 minutes to try to shut them off. Maybe the usual guests have flunkies who do that for them, but it was aggravating.

Morning breakfast spread was vast, but it took 20 minutes to walk to the main dining room. Lots of indeterminate people (Russians? Italians? Chinese? They all looked sort of mixed up and all were wearing very sloppy clothes, which must mean that they are rich). Given the time difference and the fact I hadn't had dinner the night before I figured I was ok to have a piece of roast beef for breakfast.

Clinton gave another one of her "townterviews" with students and it was broadcast on the local version of "The View" women's television program. We were encouraged when some of the locals translated the title as "Baby Talk" but it turned out to be something more along the lines of "Between Us". Too bad..would have been great to quote Clinton speaking on "Baby Talk". She made a bit of news in saying that the U.S. also now feels that Iran's atom program has been set back by sanctions, so that was a story, and she said she felt the Arizona congresswoman had been shot by "an extremist" which is likely to raise some eyebrows at home (is he an extremist or just a nutcase? Is there any difference?) 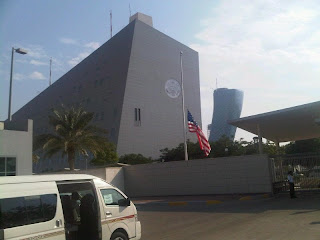 From there it was on to lunch, where she met Abu Dhabi's all powerful Crown Prince at a restaurant called, weirdly, "Joe the Baker". Then on to Masdar City (see photo above), which is oil rich Abu Dhabi's bid to take the lead in clean energy technology. It is only partially built (and not really a city, just a development) but they are working on being carbon neutral and recycling everything. The picture shows her taking in the "solar beam down" project which, as far as we could understand it, involves some new technology to concentrate and utilize energy from the sun -- which they have a lot of around here.

Abu Dhabi is a lot like Bahrain but richer. Every crane is actually working building something, and lots of the things they are building are sort of silly looking, in a modern architecture sort of way. The picture here is of the new U.S. Embassy with a new, off-kilter office tower nearby poking out behind. The total effect is funhouse rather than ultra-modern, but at least I give them credit for trying to be creative.

We drove an hour to Dubai and then checked into another (much classier, I have to say, even if not as expensive) hotel. Old friend Maher came out to meet me for dinner so it was nice to catch up.

Early call tomorrow.
Posted by A Quinn at 2:57 PM