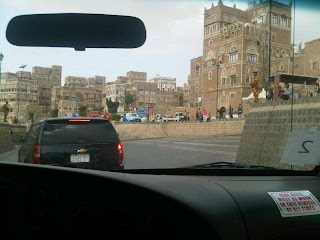 Today was the "big day" of the trip -- Clinton made an unannounced stop in Yemen to try to solidify the weak alliance against al Qaeda.

We were not allowed to report her plans to go until the plane touched down.

We left Dubai at around 9:30 a.m. after a great night at the Palace hotel, which certainly lived up to its name. I was amazed by Dubai. I hadn't been there since Gulf War II and the growth is astounding. The hotel where we stayed to desk copy during the U.S. invasion of Iraq was, at the time, at the very end of a long road leading out from the city into the hinterlands. It is now right in the middle of the action, overshadowed by huge apartment and office towers all built in the last few years. Most of them are nearly empty, we were told -- another real estate boom town gone bust, but this one on a pretty massive scale. We drove through the new center of town, marked by the 111 story (is that the number?) Burj Khalifa, the tallest building in the world. It has a sort of sinister aspect, just stretching up into the sky getting progressively skinnier. Looks like some sort of tendril reaching into space.

Then on to the plane and headed for Yemen. The landscape below, once you leave the Dubai metro area, is absolutely featureless except for drifts of blowing, pinkish sand against a greyer sand base. It is beautiful in a sort of inhuman, otherworldly way. It certainly could pass for another planet.

Sanaa itself is on a plateau and we arrived after about two hours. This was a "high risk" environment so the Diplomatic Security detail was all pretty jumpy. The motorcade drove in the swervy, herky-jerky "defensive driving" style that they use in Pakistan, I guess to make the moving target move that much more erratically. The outskirts of the town were nondescript, but it is set in a series of mountain valleys that are austere and beautiful.

First stop was the President's palace,where Clinton had what ended up being several hours of meetings with President Saleh, the autocratic leader. We saw him briefly as she entered and then were shuttled off to what looked like a sort of Arabian beer garden tent outside, where we waited and tried to make our wireless internet cards work (mostly unsuccessfully). We had spoken to Clinton on the plane so we had the guts of the story out -- she was there to "balance the relationship" with Yemen, to add more social/economic aspects to what is primarily a military/security dialogue, and to try to tell Yemenis that they've got a lot to gain by partnering with the United States.

Saleh, who feels threatened by al Qaeda himself, is apparently keen to keep the deal purely security -- it avoids embarassing lectures on democracy like the one that Clinton attempted to deliver at a later meeting with civil society activists. But the U.S. side left feeling they had at least made their point about the root causes of extremism (poverty, lack of opportunity, lack of voice). I'm not sure how much Saleh took on board. 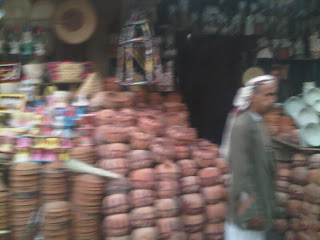 We then convoyed in the motorcade through the oldest part of Sanaa, which is really something to see. I wish we could have stopped to really look around, but that was impossible, so all we got were fleeting views out of the windows of the van -- squeezing down narrow lanes and alleyways sometimes with inches to spare. My pictures are just these jolty snapshots with the blackberry, which is a shame because it looks like one of the most photogenic cities you could want: narrow streets, crenelated old ramparts, buildings built up and leaning on each other, but all with the same grey sand stucco and light trim. The markets were full -- it is the main tourist drag, but there didn't seem to be many tourists. But there were plenty of Yemenis taking in the show: women in burqas, little kids in army like uniforms, army guys who looked like little kids in wild orange and green camouflage gear and holding Ak-47s. Almost every non-military man between 15 and 60 had a cheek bulging full of qat -- the narco habit that apparently Islam allows and which is sucking Yemen's water supplies dry at a frightening pace.

The security guys were not happy about the bazaar convoy -- from a security perspective it must have been nightmarish. But it was great to see at least a little bit of the place. It helps to make "Yemen" real beyond headlines about underwear bombers and U.S. imams preaching jihad.

I'll try to fill more of this in later but now it is time for bed. Oman, where we are now and where tomorrow's program takes place, looks clean and tidy and absolutely antithetical to its southern neighbor.
Posted by A Quinn at 4:38 PM