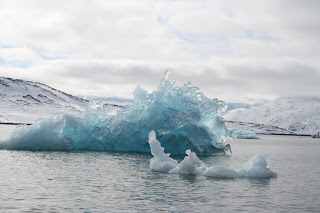 Where is Nuuk and why would you go there? Well with Clinton there's always a reason...and we are here in Greenland's tiny capital for this year's meeting of the Arctic Council

It actually is a fascinating story: climate change is accelerating most quickly in the Arctic, and retreating ice and snow are both threatening polar bears and other Arctic species as well as opening up new shipping channels and vast areas for potential oil and gas development.

The Arctic Council is a sort of half-hearted (at least thus far) attempt to regularize cooperation among the Arctic countries, and Clinton came to show that the United States -- which has its own oil and gas claims -- supports this idea.

We flew from DC for about four hours to Greenland's main international airport. I'm not going to try to spell it here, but the airport is all there is. It is a former U.S. base and has a relatively long runway, big enough for Clinton's plane. There we transferred to a military C-130 propeller plane for the 45 minute ride to Nuuk. There was some touch-and-go about whether we would actually make it..the C-130 has to physically see the runway to make a landing, and there was heavy fog. But they "found a hole" as they say and we went in -- strapped into "net seating" along the sides of the plane's bare interior hull (Clinton and the officials got real seats up front..but still sort of roughing it). The inside of military planes always takes me a little by surprise -- all of the cables and widgets and levers that are covered up on commercial planes are left exposed, and the whole thing has a sort of jerry-rigged feel to it.

We got into Nuuk and then headed into town -- maybe two stoplights and a population of 15,000. It looks bleak -- absolutely treeless, snow covered jagged rocks, and Danish-style public housing, some modern some not. The people look largely Inuit, but the bus system is pure Denmark -- beautiful brand new yellow buses. Because there really are only a couple of hotels in Nuuk, we were put up on a boat -- another name I won't try to spell. It was fine -- I think it usually serves as a small tour boat to go up the fjords. Had my own cabin, with its own shower and bathroom even.

Parts of Nuuk look lovey -- they've painted some of the older buildings light pastel colors. But there are some ugly new buildings and the whole place feels crouched very close to the ground. I can't imagine what it is like in the winter months when the sun hardly shines. 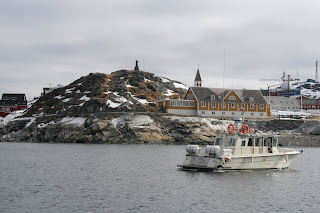 We went to the local "BrewPub" afterwards, where the main activity of Nuuk at Night was on display: drinking. People were extremely, horrendously drunk. Not nasty, but also not really able to stand up straight. The Danish bartender said it was that way pretty much all the time.

This morning we left early to accompany Clinton and the other foreign ministers on a tour of one of the local fjords. It really was a remarkable hour or two...completely empty, these great white snowcovered mountains on either side, black cold sea water and the occasional iceberg. We went out to a spot where you can see the glacier at the top of the island -- it is slowly melting, like everything else, but the Summer waterfall has not really started. Clinton and the foreign ministers did a sort of impromptu press conference on the boats..they were on one, the press was on another and the security guys were on a third. We were all sort of bobbing around next to a huge frozen waterfall....surreal.

And an added bonus in Nuuk? Santa's Mailbox

We are now at the Nuuk conference center where the council is meeting. We all already know what the results will be -- a new search and rescue deal for the arctic nations, a pledge to get serious about preventing oil spills. That story is pretty much written, but Clinton did have some pretty strong comments about Syria so that was another story.

After this we fly back to the main airport, get back on Clinton's plane, and should be back in DC by 10 p.m. or so -- amazing 30 hours.

BONUS !! -- I'm adding a complaint letter which corrects my description of the restaurant's name and takes issue with my general attitude toward Greenland (which is funny because I actually came away loving Greenland. But perhaps it didn't read that way). Anyway, herewith the letter:

I am truly sorry – mostly for you yourself – that your experience in Nuuk, Greenland had such a negative impact on you.
Well, that’s your view – your problem, and I don’t bother to argue about this.

The important difference is that the name of the restaurant means “Path of Life”, in Thai that is, and not as you suggested something more dark & dirty.

The staff is of 15 dedicated, highly skilled professionals; all Thai, and most of the staff has been with the company for more than 10 – 12 years.

PS; Excuse my poor English; but then again, you don’t speak Thai nor Danish or Greenlandic, and probably not even German or French.
And cant even get the name of a restaurant right !

PPS; just another bonus info; prostitution does not exist in Greenland !
Posted by A Quinn at 1:38 PM