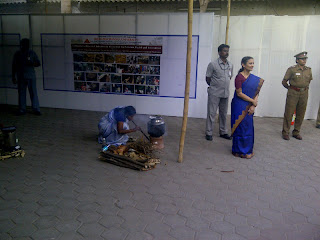 Just a quick entry for Chennai, where the schedule was pretty hectic and we only had a day.

First=Hot. This place, formerly Madras, is the hottest we've been to yet. I knew it was going to be (an Indian man, sweating happily in New Delhi, told me Chennai was "a sauna" and he wasn't kidding). Haven't seen much of the city but it is obviously a much more organic city than those parts of Delhi we saw. Traffic, full of buses, motorbikes, tuk-tuk pedicabs, is incredible and lots of people milling around on the streets. 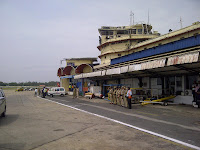 We arrived at Chennai airport (see picture) -- the Indian infrastructure binge clearly hasn't reached it -- and then went immediately to the city's new library, billed as the largest in India, where Clinton gave her policy speech. The speech was pretty clearly aimed at China, although she was careful not to say so explicitly. But any call for India to "lead" in Asia is bound to ruffle feathers in Beijing.

We had almost no time to file, and then it was back in the bus to head to Clinton's "cookstove" event where she was advocating for clean cookstoves which officials say can do a huge amount both to combat premature deaths due to smoke exposure and to fight climate change by cutting soot emissions. Hot again, particularly standing under a covered veranda with a bunch of burning cookstoves....

We were able to ditch the motorcade there and come back to the hotel to write up the speech with more background/context. It all seemed to work (I did a brief story on the cookstoves too -- it may be a bit of Clinton propaganda, but its also a "worthy" topic and one worth getting out there. 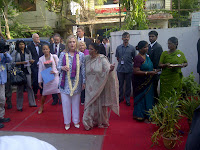 Dinner last night was Italian..real Italian. The hotel didn't even have an Indian restaurant (I guess the local grub is way too hot for visitors who would stay at a hotel like this). But I had excellent scallops and a weird kind of pasta. It ended up cost about $100 a head, which seems criminal in this country...but the food was great.

We are packing now and off to Bali. Hopefully we'll arrive before the sun sets. The next few days are going to be busy.
Posted by A Quinn at 11:07 PM