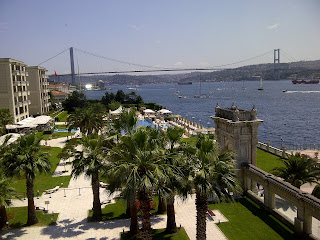 Wow. Istanbul! It looks fantastic -- sharp hills, water views, minarets -- just the way it's advertised. Definitely a place that makes you want to come back.

We got in early Friday morning and after some sleep followed Clinton over to the latest Libya Contact Group meeting, being held at an old Ottoman palace overlooking the Bosphorus. U.S. officials advertised this meeting as a "pivot point" in the war against Gaddafi, and it became clear why: Clinton said the U.S. would formally recognize the TNC as Libya's legitimate government, which means the rebels may be able to get their hands on frozen Libyan funds in the U.S.

Its hard to tell how closely these things are choreographed before they even start....U.S. officials said halfway through the day that the question of diplomatic recognition had yet to be decided, but the Italian foreign minister came out at almost the same time and said all of the coalition members had decided to give the TNC full recognition. And the "pivot point" comment ahead of time makes one think this was the pre-planned "deliverable" of the conference long before we arrived there.

Nevertheless, it made for some news which was great. The old palace (now part of a Kempinski hotel) was beatiful, and sitting right on the water (see above) with views of Istanbul's version of the Golden Gate Bridge. About halfway through the day somebody yelled and a regatta of about 50 sailboats was blowing by -- huge colorful spinnakers full with the wind, bright sunshine -- fantastic.

After the Libya meeting was over we convoyed up to Clinton's next meeting at an Islamic research insitute, where she had a meeting with the head of the Organization of the Islamic Conference (could there be a more unwieldy name?), a sort of Islamic UN. They had been trying for a long time to get the U.N. pass a resolution barring 'defamation' of religion -- something the U.S. sees as a violation of free speech rights -- and Clinton was there to talk to them about ways to have religion respected without violation freedom of expression. Tricky ideas and hard to communicate in a story, particularly when you are working at a tiny table in a dark ante-room of the research center where the temperature must have been 99 degrees.

Then..the day was over! It was already 7:30 pm but it felt early thanks to the time lag. A couple of us had a drink at the hotel's top floor bar, which has a stupendous view across the entire city with the Hagia Sophia in the distance. There just isn't time to get out and actually see anything like that this time around, but I definitely want to come back to explore it more.

Then we went down to dinner to a place which took pride in the fact that it had separate dining rooms (as well as separate kitchens) for its meat and fish dishes. I had kebab with onions and it was absolutely delicious. 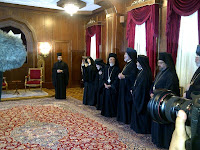 Today we've got another full day -- Clinton is meeting "youth" at an Istanbul coffee shop, then meeting the Ecumenical Patriarch Bartholomew I, then Turkish foreign minister and prime minister, where doubtless the Syria crisis will be front and center.