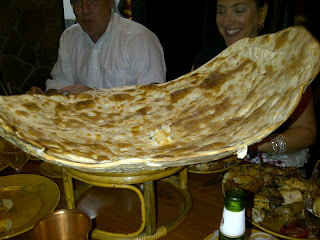 Naan of the Gods. Definitely the highlight of the trip to New Delhi...we went out for dinner last night at "Bukhara" (the original) -- tandoori oven roasted meat, great paneer, beer, and this most awesome naan.

Delhi isn't quite what I expected -- although I am the first to admit I haven't really seen any of it, so it may STILL be what I expected, but just somewhere else. We arrived late Monday night from Athens and came to the Taj Palace (Jim's favorite hotel in the world). When Clinton arrived they had a sort of Indian brass band playing at the entrance, with guards in full mufti holding torches and great banging drums. Very Survivor. The hotel is lots of marble and lots of staff all asking you what do you want, can I help you etc. etc. We had a drink in the bar (the only off-note..disco music and attitude) and then went to bed.

Just as I was getting to sleep the phone rang and one of Clinton's aides said to come down to the lobby. There had been a story out of Tripoli that about the Libyans announcing they had held talks with U.S. officials. We were brought down (at about 3 a.m. local time, but we're all at a stage now where we have no real idea what time it is anytime) and we talked to "a U.S. official" who essentially confirmed that the meeting had taken place, but emphasized that it was only to deliver a face-to-face message that Gaddafi must go. This was news, unfortunately, so I had to call in the headline to London and then run back upstairs to write the story. Back in bed by about 4 and up again at 9 to begin the day.

It wasn't a terribly hectic schedule which was fine with me. We followed Clinton to the Foreign Ministry where she was holding 'strategic dialogue' talks, and then had a press conference with her and the Indian foreign minister. They didn't say too much but clearly there hadn't been much progress on the biggest item of the U.S. wishlist,which is for India to change its laws governing corporate liability so that U.S. energy companies can sell them nuclear reactors. Its a tough question, because the only other competitors for selling reactors (France, Russia) are all state companies and as such not worried about liability issues. But even a minor accident could spell big legal trouble for GE or Westinghouse if they get sued in court, so the U.S. wants the law changed. Not an easy sell in the land of Bhopal.

After that I went back with one of my Indian colleagues to our bureau in New Delhi. There are a couple of old friends working there, and it was nice to see them if only briefly. We did up an update on my earlier story on Clinton's visit and then I took a buro car back to the hotel. I was trying to take some pictures out of the car window and the driver noticed, so he decided to show me some of the highlights of this neighborhood...stopping in the middle of traffic to point out this or that building and then urging me to "snap, snap" a photo. It was hilarious and he had absolutely no concern about tying up traffic flow....the pictures (on a blackberry, out of a car window) were no good but it was fun nonetheless. Still...we didn't get out of the "official" neighborhoods of Delhi which are all very well laid out and very leafy. Another fabricated capital city...I'd love to see old Delhi, but not on this trip.

We did do a quick excursion to a craft market -- sort of predictable stuff, but I did pick up a few things. And HOT. It seemed to get hotter as the sun went down. But I guess it is just as hot in DC this week...

After that it was NAAN and bed. I'm up early this morning and feel like I've had a good sleep so that is great. We leave in a couple of hours for Chennai, where Clinton is giving a "major address" on U.S.-India relations in the 21st century and doing a vew cultural things like a dance performance. The hope is that she'll get out there and try a few moves...
Posted by A Quinn at 11:02 PM