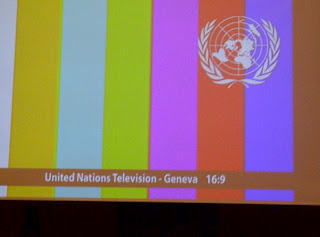 Now at the Palace of Nations in Geneva. Got some sleep last night..not enough, but it will have to do.

Opening the curtains revealed a beautiful clear day outside, and a view straight across to the mountains. It is hot (for Geneva) here..upper 80s. There were some very 60's Swiss apartment houses opposite my room (see below), each with a snazzy rooftop pool and garden, complete with trees. As I looked out the window, a woman was strolling back from her swim -- completely naked. Switzerland.

Had a quick breakfast at the hotel, with a brief James Bond moment as the two guys at the table next to me discussed Syria. Don't know who they were but one guy was European and the other Arab, and the Arab kept saying "well if this doesn't work we can do it on the ground. That is possible for us." Intrigue! Or maybe just wishful thinking. 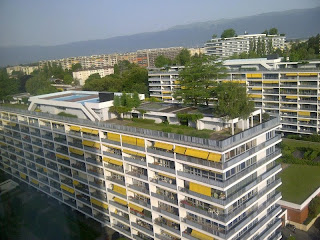 Then the 30 second motorcade to UN HQ, where we are parked in a press room. The waiting has started -- and will likely last most of the day. Clinton and the rest have closed door sessions, a lunch, and more closed door sessions. So it is all going to be hearsay until Annan comes out at the end and says his bit, followed by a brief press conference with Clinton.

I find it hard to imagine after yesterday's unproductive meeting with Lavrov that they are going to get any sort of deal that actually pushes things along. I bet they are more likely just to call for more talks and call it a draw, which of course will be a disaster for the Syrians. But we'll see.

If everything stays on schedule (which it never does) we may get home by about 8 or 9 in the evening DC time.