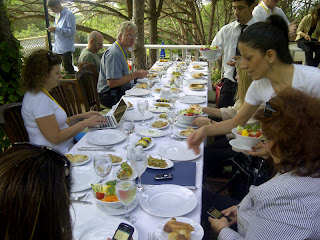 Quick trip to Istanbul after the Africa safari. These brief bites of Turkey really make me want to go back: seems to have the energy of China, in a Mediterranean setting of sea and trees and sun. Not that we saw much of that!

We got it at about 5 a.m from Ghana and headed to the hotel. I did sleep..maybe four hours? ... and then up again. As I was wandering the lobby of the hotel I ran into my old Nieman friend Holly Williams, who recently relocated to I'bul from Beijing. That was great - we had a quick lunch and caught up. Nice to see a friendly face from the past in this whirlwind!

Then Clinton had her press conference after her meetings with Turkish officials and Syrian opposition types. We'd been warned she wouldn't break new ground and for the most part she didnt, except that she did say (obliquely) that she had talked about a No Fly Zone with the Turks. This was presented as one of a number of options, and not immediate, so I put that in my first story, but the peril of wire service journalism is that editors far away will latch on to something and move it up, harden it up, and make it the lead. So our story went out quite strong on the NFZ, which altho accurate was sort of over emphasizing it. I had to scramble to try to tone the story down....and once I had done that with our Istanbul datelined story, I realized that the main Syria wrap had taken the hard lede from us so I had to start calling around to tone THAT down. Its hard because you want to get it right: they did talk about NFZ, which was news. But it wasn't as if they came out suggesting that was the next step (something which could give the Syrian rebels more hope than they should have at this stage). Stressful and lots of phone calls to London etc, but I think we got the right mix. I hope so.

After that we loaded into the vans to follow Clinton to a meeting with Turkey's president at his official residence. The embassy people had said there was nothing around in this suburban area, and that we would have to wait in the vans for up to two hours. But lo and behold we found a great place hardly 300 yards away: the "Secret Garden", a restaurant/wedding place/beer hall on the hill overlooking the Bosphorous. It was an ideal way to end the trip -- great, simple food (fantastic tomatoes, babaganoush, stuffed bell peppers, and this great fried cheese in philo dough concoction. The sun was up but we were in the shade, the breeze was blowing, the Turkish staff as nice as they could be. An hour to catch our breath and really feel -- briefly -- that we were in Turkey.

But that ended, and we were back in the motorcade and headed to the airport. Five hours to Shannon, an hour layover for Irish coffee, and then seven more hours to DC. I'm so glad to be home but this has been a fantastic trip! The South Africa part in particular was like a homecoming. Now I am going to bed so I can get up tomorrow and get the plane to Maine for a week off by the lake with Mom,Jim and Dog. 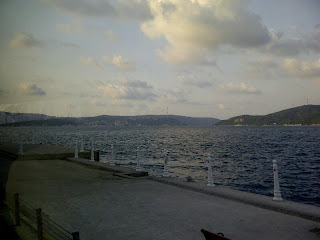 Final image: one of the views of the Bosphorous as we careened past in the motorcade on the way to the airport. Makes you want to go to Istanbul!