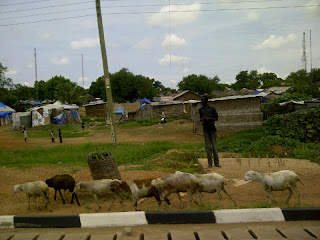 We flew from Dakar to Kampala on Thursday morning. It was a funny day -- we left at 9 a.m., flew seven hours, and arrived at 7 p.m. thanks to the time difference. Nothing much accomplished news-wise. We went from the airport into the hotel (a long drive) had dinner and went to bed.

It's a good thing that we did, because we had a very early start on Friday. This was probably the longest/toughest day of the trip, and we were told to report to the motorcade at 7 a.m. That was just enough time to wake, up, get showered, make some coffee in the room, and peruse the latest on the Ebola outbreak. 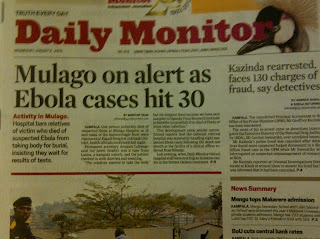 Ebola is the kind of thing that gets a lot of press, particularly outside of Africa. But while the Ugandans were certainly concerned (they made you not only go through a metal detector to go into the hotel, but also squirted you hand sanitizer). But it didn't feel like a crisis and people weren't panicky. These things are pretty hard to contract unless you are in very close quarters with someone who is infected, and there had been no sign of it in Kampala.

By daylight Uganda looks very crowded. Kampala is a city spread out over a number of hills, and it was hard to get a sense of it but there were lots of people, lots of cars and lots of advertisements. In places like this Clinton's motorcade,with the enforced traffic stops for everyone else, must be infuriating for the local drivers. The drive out takes you through sort of suburban countryside -- again lots of people, some big new houses, some township/slums, and then toward the shores of Lake Victoria. It all looked very green and very very fertile. It must be banana harvesting season (or perhaps every month is banana harvesting season in Uganda) because there were trucks of bananas, guys riding mopeds with big bunches of bananas, bananas everywhere.

he flight from Kampala to Juba, the capital of South Sudan, only takes an hour but in every respect the places are different. Where Kampala was hectic and green, Juba was semi-deserted and brown (see picture at the top). Its the world's youngest nation and one of the poorest, and "capital" is a grand word for the fast expanding but still pretty basic settlement that is going on. But they have a new-ish airport and as we arrived a fleet of Land Cruisers pulled up to take us to Clinton's meeting with the president.

We honestly hardly saw anything except the inside of the presidential office building (which looked like a small-town Holiday Inn) and then a few streets of Juba. Some had lots of new building, some like the one pictured above were still just shacks and goats. It has the feeling of a wild west boomtown -- lots of people pulled in by the intrigue of this new country, both its possibilities and its dangers.

Clinton's meeting appeared to go pretty well. She came out and gave a press conference with the foreign minister, emphasizing that it was time for the two Sudans to put their dispute over oil revenues behind them, start pumping again, and avoid economic catastrophe for both. Her key quote was "a percentage of something is better than a percentage of nothing", which must ring true for a people who have fought decades for their own country.

With that, it was back to the airport and back to Kampala. Two hours in South Sudan doesn't leave you any wiser, but at least now I have a visual image of the place. It feels like everybody is hoping for the best, but there doesn't seem to be a lot to work with there. 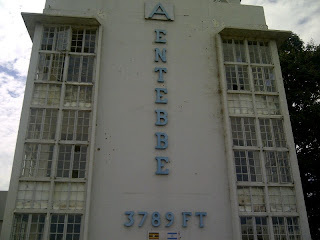 In Kampala, we were using the old Entebbe airport, scene of the famous Israeli commando raid that freed hijacked airline passengers in the 70's. There are still bullet holes on the control tower, and apparently Israel's Netanyahu (whose brother was a lead commando and got killed in the raid) visits every once in a while to pay his respects. Otherwise it is now used as a VIP terminal.

The rest of the day was a blur. We went to the president's office where she had a meeting with President Museveni -- and apparently urged him to think about retirement -- and then to a military base where she watched a demonstration by U.S. and Ugandan soldiers of the U.S.-made drones that the Ugandan military is now flying over Mogadishu as part of the AU effort to turn back al Shabaab.

I'd never seen a drone before and it looks remarkably like a model airplane, fitted with several cameras in in then nose. There demonstration involved a team flying a drone over our heads, demonstrating how well it could make out surface features and people. Weird and spooky if you ask me, but Clinton seemed intrigued. She spent some time talking to the "pilots" and said she foresaw a day when similar drones might be used to hunt Joseph Kony, who is on the run in Central Africa. 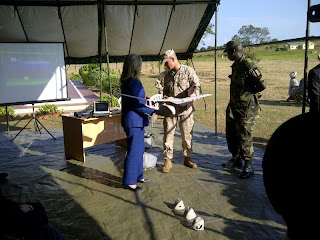 After the demonstration one of the embassy guys told us that they did not want to "land" the drone when the TV cameras were on, because it was designed to split into pieces to avoid damage. They were afraid the TVs would make it looked like the thing crashed and burned.

From there it was on to a health clinic for more talk on HIV. After years of doing so well in the fight against AIDS, Uganda is now the only African country where prevalence rates are going up. Some experts put this to a lack of emphasis on prevention (and especially condoms), thanks to more conservative elements in society and religious types. And then back to the hotel to write the story (or stories in this case), and then to bed.

We've had a a full day in Nairobi today but I will try to get that into the next post. Tonight we are off to "Carnivore", a famous Nairobi institution where you get skewers of every kind of meat (Imapala, Crocodile etc).