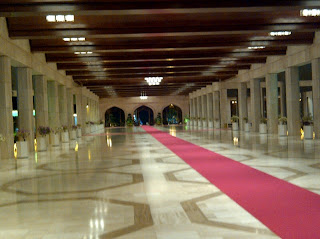 The Sultan of Brunei's official palace (at least the one that we saw) looks pretty much like the Washington DC Convention Center -- only with more neon.

Brunei is a small place, but at least in terms of housing the sultan thinks big. We drove over from the hotel in the evening. Clinton and her top officials were to have dinner with the sultan, but we were allowed to come along to cover their initial meeting. Most of us went, not because of any news value but because we wanted to see the palace.

Not what I was expecting. Instead of an Arabian Nights theme, or perhaps something Southeast Asian, the sultan opted for a 1970's Las Vegas shopping center approach. You drive up a huge entryway, flanked with blinking neon palm trees and centered on a row of huge pillars, also bathed in neon. The entrance looks sort of like an airport terminal, with hallways stretching back into the interior. Clinton and her team went in and we followed ...down the huge hall pictured above, to a series of escalators that go up to the second floor. Here the proportions shrank a bit, and Clinton was greeted by the sultan. They went into a nearby state dining room (no windows, as far as I could tell) and we went back downstairs for our dinner. It was nice enough, but nothing special ... chicken, shrimp, etc....still, it was hospitable of them to give us anything at all.