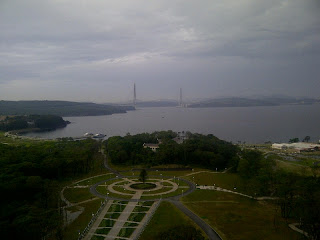 We are in Vladivostok, sort of. We are actually on "Russky Island" (no joke), which used to be a naval base and which the Russian government is making over. And we are only sort of on Russky Island -- we are actually in APEC, the Asia Pacific Economic Cooperation forum, with no way to get out.

You can see Vladivostok just over the gigantic suspension bridge (the largest of its kind in the world), but where we are feels as though it could be any place: they are holding APEC at a brand new Russian university, which has the look and feel of a California junior college. We are staying in brand new dorms, the conference itself is taking place in the brand new convention center. But that's it -- they've got the entire island on lockdown so we can't actually get out to see anything.

Our arrival at the airport was cool -- they taxi'd Clinton's airplane to the corner of the airfield where all the national delegations had parked their planes, so when you walked down the stairs to the tarmac you were in a huge parking lot full of 747s all marked with national flags. The richer countries (Japan) bring two. It made Clinton's little plane look pretty insignificant.

But after that, we've been stuck. So we meander around here. The buildings don't look like they will age very well, and all have a sort of submarine interior construction with metal beams running along the bottom of doorways, I guess for fire suppression. But it means that you are constantly tripping and stubbing your toe. They also have one of the wackiest elevator systems I've ever seen -- the buildings are set into a hillside, and all the floors have two numbers (one counting from the ground level, one counting from the third level where their backdoors are). So if you want to go to the 6th floor, sometimes you press 3 and sometimes you press 6. Also a lot of the hallways don't connect, so you've got to go back into the elevator in the next wing where the numbering is totally different. It makes for a lot of confusion.

But that said, the accommodations are fine and the Russians have put themselves out to make things work -- there are big buffet spreads (although we are hearing tales of food poisoning) and lots of coffee. Last night they had a welcoming reception where the vodka flowed. So no commplaints.

This set-0piece events involve endless waiting around. Clinton has had round robin meetings with most of the Asia Pacific leaders, and in each case the press is herded in for the photograph of the handshake, and then hearded back out to wait another hour for the next one. We get almost no information about what is going on behind the closed doors.

This can be frustrating, especially when other delegations are not so cautious with the news. Yesterday we had some very vague comments from a "senior State Department official" describing Clinton's meeting with her Russian counterpart Sergei Lavrov. This was pretty thin gruel, but we made the most of it. Then two hours later Lavrov himself spoke to Russian journalists, on the record and in detail about what said to Clinton. So the story ended up looking ridiculously unbalanced, but that is all we had to work with. It can be interesting to see how these tactical decisions about how to "manage" the news flow can either work (as they did for the Russians) or not work (as for the Americans in this case).

And that, I'm afraid, is that. We are waiting around now while Clinton has more meetings, then we head into the city for a brief stop off at the consulate where she will do a press conference -- so at least we will see something of Vladivostok. Then it is back on the plane for the 14 hour journey home. I'm ready.

Here's a final view of the bridge at night -- they have it rigged up with a massive lighting system which is wonderful, but hard to capture on a blackberry camera. 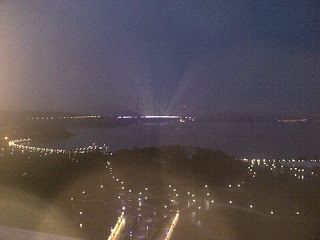