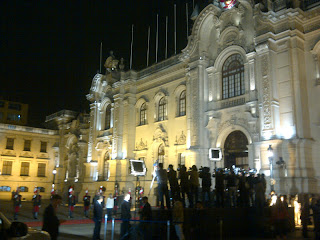 This Peru trip was a lot different from the last one -- no pisco sours this time around! Clinton was due to attend a conference on women entrepreneurs in Latin America ...not exactly top of the news, but typical of her schedule these days.

Of course, the news kept rolling, and the main thing in the headlines this week remains the deadly attack on the U.S. mission in Benghazi. This has become a political football, with Romney and other Republicans blasting the Obama administration for what they say were security lapses and what they hint is an official cover up.

We rode for 8 hours in the plane and then down to Lima..a huge, sprawling and dusty (or at least grey-seeming) city surrounded by mountains. We went directly to the U.S. embassy, where Clinton gave her usual stump speech to the employees. After that, she was sequestered in another room for five separate network tv interviews. We had a sense there was something afoot...as of last week, the only people going on the trip were the wire reporters. But over the weekend the word went out that the networks wanted in, so all of a sudden the press group grew from 3 to 12 as we had ABC/NBC/CBS/Fox plus CNN plus camera crew.

I'm not sure why they all suddenly signed up. The word was that Clinton had looked at the manifest on Friday and wasn't happy that there were no TV folks along. So they all got promised interviews, as long as they would come along to Peru. So they did. These interviews are usually very repetitive and break little new ground. But this time Clinton did, when pressed by the CNN reporter Elise Labott, say that she "took responsbility" for the security around the Benghazi facility -- which, coming one day before the presidential debate, looked like an attempt to shield Obama from charges that he himself was responsible for what ultimately happened there.

So those of us (the wires) who were not in the interview were left scrambling. Elise gave us the quotes, but they were incomplete because the tape was still being fed and transcribed. We cobbled together something along lines of "Clinton takes responsibility" and then were waiting for the full quotes which were a long time coming. For us it was sort of an uncomfortable position to be in -- here we were in Peru, at significant expense to our news organizations, and we were still picking up a CNN interview.

We went to the presidential palace -- a wonderful palazzo in the central part of old Lima-- where Clinton was due to have dinner with the president. They met, and then came out for "remarks"..no questions. We decided that it was worth shouting a question to Clinton to see if she would give us something similar to what she did CNN. It fell to me to do the shouting, and it didn't work -- she smiled, said "later", and walked out. So we had nothing.

Back at the hotel there was lots of telephoning with Washington and working up a story with fuller quotes from CNN and later from Fox. The stories were all ok -- they reflected what she said -- but it was still frustrating because we had not got the quotes ourselves. But sometimes that is the way things work when you are on the road (not that that mollifies editors). 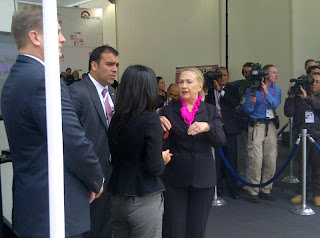 This morning Clinton took part in the conference on women...obviously very dear to her heart, but not newsworthy. And then we went to Peru's garment district, where she toured a new market and met the local contestants for a Project Runway-style show. It was a brief moment in , the real Lima, and I wish I had been able to take pictures of the buildings across the road from where she did her tour -- floor after floor of glass windows with female dummies in very elaborate dresses. In amongst the dummies were some of the workers in these shops, waving. It was a great image and a little surreal, but I didn't get the shot. Instead here's a picture of Clinton talking to some of the folks there.

After that Clinton's folks put out some canned quotes which essentially repeated what she said last night. I sent those on to Washington to get wrapped into the debate story, and then we got back on the plane. 9 hours later, I'm home and the debate is on.